A prototype Personal Trooper developed by Mao Industries, the Wildwurger is specialized for close to mid-range frontal assaults, designed to work in tandem with the long-range sniper unit Wildfalken. Unlike its partner unit, the Wildwurger uses the Gespenst Series's GII Frame instead of the Huckebein Series' H Frame, emphasizing robustness over mobility, suiting the PT's role. Aside from a high-performance Tesla Drive mounted on the back for flight, the Wildwurger does not utilize any other EOT, instead relying on physical weaponry and ammunition for combat. Finally, by purging the protective "Jacket Armor" (ジャケット・アーマー) on the legs, skirt plates, body, shoulders, backpack and head through unlocking separation bolts, the Wildwurger can enter “High Mobility Mode” (高機動モード | Koukidou Mode), reducing its weight and cranking the Tesla Drive’s output to Full Drive. In this form, the Wildwurger is now capable of deploying its wings, which are layered with a “Break Field” as a result of Full Drive, allowing them to be used as deadly slashing weapons.

As a side note, the Jacket Armor was supposed to be attached on or detached from the Wildwurger prior to deployment according to the mission requirements, and was not planned to be casually purged mid-battle and have the Wildwurger rapidly switch modes like how Arado does (aside from emergency situations).

Due to the discontinuation of the SRX Project following the Balmar Campaign, the Wildwurger was built without use of any EOT aside from its Tesla Drive.

The Wildwurger was rolled out from Mao Industries' Moon facility amidst the Sealing War and was delivered to the Alpha Numbers with Ratsel Feinschmecker at the controls, escorted by Viletta Vadim's Huckebein Mk-III Type-L. They arrived just in time as Arado Balanga's Huckebein Mk-III Type-R was ambushed by Titans forces and was about to be shot down by Yazan Gable's Hambrabi, with Arado and Ratsel switching machines. The Alpha Numbers soon arrived to provide support and drove away the Titans forces, as the Type-R retreats. The Wildwurger would serve as Arado's personal machine throughout the rest of the Sealing War, and was finally capable of initiating Twin Bird Strike after Arado successfully persuaded Seolla Schweitzer to join the Alpha Numbers with her Wildfalken. After Nashim Gan Eden was finally defeated, Arado and the Wildwurger charged straight into the exploding Artificial God in order to rescue Irui Gan Eden, leaving Arado and Irui's fates unknown.

In Cobray Route, it was revealed that Arado and his Wildwurger, along with a rescued Irui, were retrieved by Seabook Arno following the showdown with Nashim Gan Eden. 4 months later, the Wildwurger reappeared on the battlefield, assisting the Archangel against Machine Primevals, while also saving the Wildfalken from being shot down at the nick of time, before conducting Twin Bird Strike on a Primeval. The Wildwurger was then active throughout the eventual Galactic War, all the way to the final showdown against Keisar Ephes.

After the ATX Project was greenlit once more following the L5 Campaign, Mao Industries developed the Wildwurger based on the concept of the PTX-003C Alteisen. The head section is modified from that of a Gespenst type, installed with a twin-eye camera covered by a protective visor. The elongated head horn is based on the Alteisen’s Heat Horn, however as the weapon was judged hard to use, an environmental sensor was fitted in the horn instead. Furthermore, the Wildwurger's High Mobility Mode is in fact reminiscent of the PT's initial design, with the Jacket Armor being an afterthought. The PT was meant to also be an agile high-speed combat unit like the Wildfalken, equipped with only a light layer of armor on the body. Prof. Marion Radom was planning to get rid of the Alteisen's sturdy armor and absurd weapons in exchange for mobility, however after seeing Kyousuke Nanbu's combat data throughout the DC War and L5 Campaign, she had a change of thought and wanted to rework the Wildwurger's developmental concept. This was met with opposition from the Wildfalken's primary designer, Prof. Kirk Hamill however, and so ultimately the implementation of the Jacket Armor system was agreed on, allowing the Wildwurger to switch between a heavily-armored and a high-mobility form.

The TFF decided to push up the deadline for various Personal Troopers that were under development at Mao Industries' Moon facility, which is why several of them were not yet ready for deployment when the Hiryuu Kai arrived to receive robots, the Wildwurger being one of them. Its basic structure had already been finished, however this was the period when Marion and Kirk were still arguing about the Wurger's combat concept.

After the Wildwurger had been completed, Marion dropped by the Hagane at Aviano Base to deliver the PT. A Neue DC attack later followed, with Arado sortieing in a Lion to confront Seolla's Wildfalken, however he was soon ambushed by Archibald Grimms' troops, causing severe damage to his machine. Just as the Wildfalken was about to fire the finishing shot, the R-1, Astelion, Fairlion Type-S and Fairlion Type-G arrived to provide support, bringing with them the Wildwurger. Latune Subbota awakened an unconscious Arado inside the damaged Lion and helped him enter the Wildwurger, as the others shielded them against enemy fire. With his new partner, Arado and his teammates decimated the ambush forces and forced Archibald to retreat, however he has yet to break Seolla free from her brainwashing. The Wildwurger would then serve as Arado's personal machine throughout the rest of the eventual 4-way conflict, and was finally capable of initiating Twin Bird Strike after Seolla successfully regained her memories and joined the Steel Dragon Squadron with her Wildfalken.

The Wildwurger was stored on the Hagane following the 4-way conflict of OG2, and was sent back into action after Arado and his friends were rescued from the Bartoll units trapping them during the first battle of Hellgate. It later fought battles for the remainder of the game against the Shura, Duminas' group, Dark Brain and Neo Granzon.

Debuts in event "Shrike and Falcon" (百舌と隼) in September 2019 as an SSR Defender.

A trio of Gatling guns are mounted on the Wildwurger's left arm, reminiscent of the Alteisen's Triple Machine Cannon. Each Gatling Cannon is a separate unit, allowing for easier maintenance work such as swapping barrels or reloading ammunition. The entire weapon unit itself can also be purged if required. The weapon also serves as the storage rack for the Cold Metal Sword.

A physical sword stored in the holder rack built into the Triple Gatling Cannon, used for slashing melee attacks.

A bullpup-type Machine Gun with excellent piercing power. It utilizes the specialized ricochet-suppressing bullet SSS2600. Below the barrel mounts a single APTGM (Anti-Personal Trooper Guided Missile) suitable for the Wildwurger's blitzkrieg tactics. In OG, only the Type-L's Machine Gun is a Swappable Weapon, while the one on this unit is a Fixed Weapon.

The Wildwurger's signature weapon, a gigantic pincer powered by actuator motors mounted on the right forearm, resembling a stag beetle's claws. The sturdy weapon can also be used to strike and bash enemies around. The Wildwurger was initially planned to be equipped with a piercing weapon similar to the Alteisen's Revolving Stake, however there were problems regarding its structure and usage in combat (most likely due to the Wildwurger's simpler construction), which is why a "severing" weapon was chosen instead. In Alpha and OG2, the Wildwurger first bashes the enemy around with the Crusher, then secures the enemy with the weapon, raises them overhead, and finally crushes them in half. From OGs onwards, the Wildwurger would charge straight into the enemy with its Crusher open, grabs hold of the enemy, then drags them along the ground before performing the pincer crush.

Wildwurger's ultimate solo attack. Purging the Jacket Armor, Wildwurger enters High Mobility Mode and deploys its Break Field-layered wings, then rapidly slashes the enemy multiple times at extreme speed with the wings. From OGs onwards, Wildwurger uses its Cold Metal Sword for slashing instead, holding the Sword in front horizontally and ramming into the enemy for the final strike. The Triple Gatling Cannon would also no longer be purged like in the previous games.

Wildwurger and Wildfalken's combination attack, also known as "Pattern TBS" (パターンTBS). To perform the technique, Wildwurger enters High Mobility Mode while Wildfalken transforms its wings to access Full Drive. Although the Motion Pattern for the attack is already programmed into both machines' TC-OS, precise timing adjustment is required in order to maximize the damage, which is why the pilot of each unit must be familiar with their partner's movement habits. The attack is divided into 3 stages, Eins (アインス | One), Zwei (ツヴァイ | Two) and Drei (ドライ | Three), with different animation depending on the game: 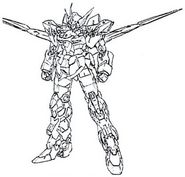 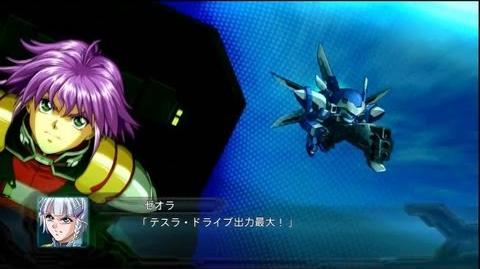