A prototype Personal Trooper developed by Mao Industries, the Wildfalken is specialized for long-range bombardment, designed to work in tandem with the close-to-mid-range assault unit Wildwurger. Unlike its partner unit, the Wildfalken uses the Huckebein Series's H Frame instead of the Gespenst Series' GII Frame, emphasizing mobility over robustness, suiting the PT's role. The Wildfalken does not utilize any other EOT aside from a high-performance Tesla Drive array mounted on the back, which provides the mecha with superior maneuverability. When the Tesla Drive is adjusted to maximum output, the mecha's rear wings transform, either extending outwards (Alpha) or bending downwards (OG). This also results in the wings being layered with a “Break Field”, allowing them to be used as deadly slashing weapons. The Wildfalken's primary weapon is the Oxtongue Rifle, capable of firing both beam and physical projectiles.

Due to the discontinuation of the SRX Project following the Balmar Campaign, the Wildfalken was built without use of any EOT aside from its Tesla Drive.

The Wildfalken was rolled out from Mao Industries' Moon facility in the early phases of the Sealing War and was delivered to Londo Bell's base of operations, the colony Londenion at Side 1. However, the colony was infiltrated by Titans operative Seolla Schweitzer, who took the Wildfalken for herself and later rendezvoused with her comrades during the Titans' raid on Londenion. The Wildfalken served as Seolla's personal machine for the rest of the Sealing War, often clashing with Arado Balanga's Huckebein Mk-III Type-R and Wildwurger on numerous occasions, until Arado successfully convinced Seolla to join the Alpha Numbers, enabling the initiation of the Twin Bird Strike attack.

If Cobray Route was chosen, following the defeat of Nashim Gan Eden, Seolla and the Wildfalken were stationed back at Londenion. The Wildfalken fought as a pair with Cobray Gordon's Werkbau for some time until the return of the missing Wildwurger.

After the ATX Project was greenlit once more following the L5 Campaign, Mao Industries developed the Wildfalken based on the concept of the PTX-007-03C Weissritter, inheriting the previous model's high mobility and sniping capabilities. Prof. Kirk Hamill was in charge of the development.

The Wildfalken was sent to Hickam Base for testing after completion, piloted by Latune Subbota, however it was hijacked by Seolla when the test site was attacked by DC remnant forces. Seolla used the Wildfalken as her personal machine throughout the rest of game, often clashing with Arado's R-Blade and Wildwurger on many occasions, until Seolla successfully broke free from her own brainwashing and joined the Steel Dragon Squadron, enabling the initiation of the Twin Bird Strike attack.

The Wildfalken was stored on the Hagane following the 4-way conflict of OG2, and was sent back into action after Arado and his friends were rescued from the Bartoll units trapping them during the first battle of Hellgate. It later fought battles for the remainder of the game against the Shura, Duminas' group, Dark Brain and Neo Granzon.

Debuts in event "Shrike and Falcon" (百舌と隼) in September 2019 as an SSR Defender.

A pair of Vulcan guns are mounted on the Wildfalken's head. Good for taking out small targets such as tanks and missiles.

Launchable missile containers stored within the shoulders and kneecaps, developed from the Gespenst Series' Split Missile. After the containers are fired, the missiles will then be deployed from containers and strike at the enemy. Each container stores 8 box-shaped missiles, for a total of 24 missiles. MAP Weapon.

Energy sabers often seen in Huckebein Series-related machines. The blade is generated through manipulation of gravity waves. A pair of them are stored in the Wildfalken's forearms. Swappable Weapon in OG.

A weapon reminiscent of the Weissritter's Oxtongue Launcher (an upgraded version of the Launcher in OG). Similar to its predecessor, the Oxtongue Rifle is capable of switching to E Mode or B Mode, firing energy blasts or armor-piercing rounds respectively. The rifle's name comes from the Ox Tongue Spear, a broad-headed spear used in Europe during the 15th-16th centuries. In Alpha, only "Oxtongue Rifle" and "Oxtongue Rifle (W)" existed as attacks, with the former consisting of Wildfalken firing an B shot, then a E shot.

The "E" stands for "Energy". Drawing power from its own reactor, Wildfalken fires energy blasts from the lower barrel of the Oxtongue Rifle. Either rapid shots or a concentrated burst can be fired. Capable of striking down multiple enemy units at once with the numerous beams fired, this mode is used for long-range strafing. ALL Attack from OGs onwards.
The "B" stands for "Bullet". Wildfalken fires armor-piercing shells from the upper barrel of the Oxtongue Rifle. Although it has shorter reach compared to E Mode, it packs significantly more power. Wildfalken would usually approach the enemy from above when using this mode.
The "W" stands for "Double". A special maneuver in which the Wildfalken engages the enemy with both modes of the Oxtongue Rifle, assaulting the enemy with E Mode first before blasting them with B Mode.

Wildwurger and Wildfalken's combination attack, also known as "Pattern TBS" (パターンTBS). To perform the technique, Wildwurger enters High Mobility Mode while Wildfalken transforms its wings to access Full Drive. Although the Motion Pattern for the attack is already programmed into both machines' TC-OS, precise timing adjustment is required in order to maximize the damage, which is why the pilot of each unit must be familiar with their partner's movement habits. The attack is divided into 3 stages, Eins (アインス | One), Zwei (ツヴァイ | Two) and Drei (ドライ | Three), with different animation depending on the game: 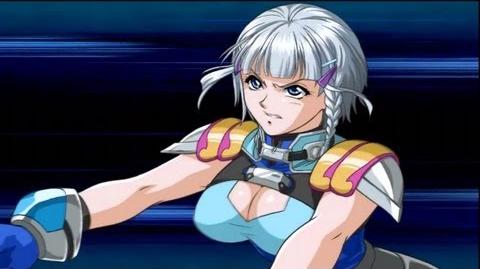