The Weiss Ritter is colored almost completely white with blue trim in certain areas. Despite its heavily-ornate appearance, its armor is only half the strength of the original Gespenst, and extremely light in comparison. This allows the unit to use its speed to compensate for the lack of defense in the new armor. The Rein Weiss Ritter looks biomechanical in nature with traces of the white armor plating of the original Weiss but replaced with green, tentacle-like tendrils and red spherical jewels around its chassis. Coupled with four bat-like wings on its back, this gives the Rein Weiss Ritter an unusual, somewhat demonic appearance.

The ATX Project is designed to set up new Personal Troopers that proves to be the next generation high-spec weapons. A long range combat unit is created using the PTX-007-3 Gespenst MK II as a base. This new unit utilizes a Tesla Drive to fly. It excels at speed/maneuverability and therefore sacrifices armor. This unit carries an array of weapons with its main one being the Ochstan Launcher. The codename for this unit is the PTX-007-03C Weiss Ritter, created and designed by Marion Radom, who originally conceived the idea of a newly-customized Gespenst MK II, although the unit later proves to be too expensive to mass-produce and only one unit is completed. This single unit is given to ATX Team member, Excellen Browning. She takes this as her personal unit in the events of Original Generation and works alongside boyfriend Kyosuke Nanbu and his Alt Eisen. Together, they can perform their signature combination attack, the Rampage Ghost.

In Original Generation 2, after the Einst capture Excellen and her machine, they begin to possess her, which is not difficult due to her body being part-Einst. Her machine is upgraded using Einst technology, boosting the power output (and consequently, the machine's speed) to new heights. 60 percent of the armor is replaced by Einst technology, including the transformable Howling Launcher. After Excellen returns to her teammates, this new machine is designated as the PTX-007-03UN Rein Weiss Ritter. Despite the ATX Team being hesitant to use Einst technology, Excellen utilizes this weapon to its fullest. At the end of the war, after the Einst are defeated, the Einst components on the machine crumbles and reverts it back into the original Weiss Ritter.

In Super Robot Wars Original Generations, the enhancement process of the Rein Weiss Ritter is apparently an alteration of the original chassis of the Weiss Ritter, after an examination done by Ryoto Hikawa and Raji Montoya. Therefore, it does not have any true Einst elements on the machine as the Rein Weiss Ritter does not revert back into the original, thereby allowing Excellen to fully utilize it during the Bartoll attacks, retconning the events of the Nintendo Game Boy Advance version of Original Generation 2.

Data for this version of the Weiss Ritter was found on the computers of the Trilobite-class battleship Neverland by the Orchestral Army. They used this data, along with data from other Personal Troopers, to create three-meter-tall miniaturized versions of the mecha as artificial soldiers in the war with Elfetale. After the war, these Personal Troopers disappeared, occasionally spotted wandering around the Endless Frontier until they were recovered by Haken Browning.

The Weiss Ritter Abend resembles the original Weiss Ritter, but with red trim instead of blue, and larger beam cannons (this may be a result of the change in size). It also has wing binders that can open and deploy beam wings for a slightly more demonic appearance. Its Partisan rifle can also split open to fire a larger blast of energy, and has a cord leading from the back of the rifle, like the tail of the Rein Weiss Ritter.

In Super Robot Wars OG Saga: EXCEED, the Weißritter Abend and Alteisen Nacht both get upgrades. The Weißritter Abend in this installment sprouts permanent demonic laser wings, primarily utilizing a red frame instead of the previous' blue frame except in Rage Mode, where the colors are switched around. Also, instead of using the original's Oxtongue rifle, it uses a new rifle called a Partisan Launcher, as instead of splitting into two sections, it can now split into three. Another detail that, if anything, can be an indicator for future SRW OG games, is that the Weißritter Abend was officially told of as being a Gespenst MK IV variant.

This plasma sword is the Weiss Ritter's only melee weapon. 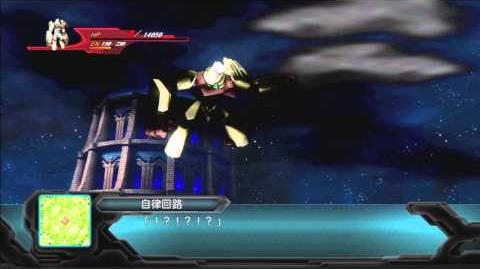