The Valsion (ヴァルシオン, Varushion) is Bian Zoldark's personal Super Robot and the Divine Crusaders ultimate weapon. DCAM stands for Divine Crusader Armored Module, as in the Original Generation universe, it was considered part of the series. In the Alpha Universe it was given the designation Divine Crusader Super Machinery Humanoid, because it was a part of the Super Machinery Humanoid project the DC was working on, which was meant to create Super Robots to defend the Earth against alien invasion. It's also known as the "Ultimate Robot".

In the OG universe, Valsion was built during DC's status as the EOTI part of Project UR. It was developed using the EOT observed in Meteor 3, but like the Granzon, does not have any actual EOT used within the unit. While the EFF knew about and had provided funding for the Granzon, the Valsion was the EOTI’s secret ace in the hole. While it was not actually as powerful as the Granzon, Shu’s (Granzon's designer and pilot) fickle nature was known (and welcomed) by Bian Zoldark; as a result the Valsion was considered the Divine Crusader’s top weapon. The power of its Cross Smasher and Mega Graviton Wave is enough to turn the tide of battle by itself. It was also equipped with a Tesla Drive as well as a Warp Field Emitter Device.

The Valsion features two internal weapon systems, both based on EOT. The first, known as the "Cross Smasher", emits two oppositely charged beams, which attract and repel each other equally to form a single powerful spiraling beam attack. This Cross Smasher weapon system would become the trademark of the Super Machinery humanoid series, and was much stronger than a conventional beam weapon. The second EOT based weapon equipped on the Valsion was the Mega Graviton Wave, a multidirectional attack that used charged energy to form a gravitational anomaly which would damage all units in its immediate vicinity. The Valsion also wielded a sword known as the Divine Arm. It also possessed a Tesla Drive to enable it to fly and a Gravicon (Gravity Control) system wich enabled its Mega Graviton Wave.

Developed as a mass produced variant of the original, this model lacks the Mega Graviton Wave but is equipped with the GEIM system, 7 were built by the Divine Crusaders after the defeat of Bian Zoldark and destroyed by the EFA. In the F/FF continuity it was an upgraded Valsion and only 2 were made. These were piloted by Paptimus Scirocco of Gundam Z and Shapiro Keats of Dancouger.

A space tuned Valsion developed in secret by Isurugi Industries after the Aerogater War. After a battle against the ATX team it would be moved to Hells Gate by former DC commander, Lorenzo Di Montegnacco.
It features similar weapons to the original Valsion but lacks the Divine Blade. During its first battle it could only fire the Cross Smasher but after Lorenzo is killed by Wilhelm von Juergen during the events of Super Robot Wars Original Generation Gaiden the Type-CF would be modified to be able to use the Mega Graviton Wave. The unit also served as the core of the ODE (Omni Dendro Encephalon System) System. After Juergen is slain by the soon to be KouRyu Sentai, Duminass would take the unit and implant Lamia Loveless as the new core of the ODE System. The machine is finally destroyed when Axel Almer stops Lamia from self destructing using Code DTD and destroys the unit with Code: Kirin, saving Lamia in the process. The unit would twice reappear during the Langran civil war in La Gias, once against Wong Yanglong, Ryune Zoldark and the Kouryu Sentai members that accompanied them before facing the powerful Chou Masouki Eulid piloted by Karxs Zan Valhalevia.
The second would be piloted by the Divine Crusader pilot, Oleg Nazarov, against a revived Shu Shirakawa and Team Yelba, this act proved futile as the machine would be destroyed and Oleg killed in action. During the events of Masou Kishin F the data from the Type-CF would be used to develop the Valsionga. 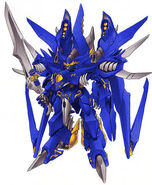 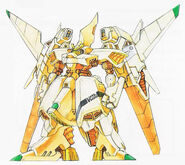