Super Robot Wars V (スーパーロボット大戦V, Sūpā Robotto Taisen V) is a strategy role-playing game game developed by B.B. Studio and published by Bandai Namco Entertainment for the PlayStation 4 and PlayStation Vita. The game was released in Japan and Asian territories on February 23, 2017 as part of the 25th anniversary of the Super Robot Wars series, being the first mainstream Super Robot Wars game to receive an Asian-English release.

The game's catchphrase is "Into a New Voyage, Giants of Steel" (鋼の巨人達は、新たなるへ, Hagane no Kyojin-tachi wa, aratanaru e).

A century has passed since then, and after the end of the Jupiter War, the Earth Federation was invaded by an alien species known as the "Gamillas". The Gamillas established a forward base on Pluto, and launched planet bombs at Earth. The planet bombs destroyed the space colonies and devastated Earth. The oceans were evaporated, the air was polluted, and the survivors were forced to retreat to shelters deep underground. Scientists estimated that only one year remained before humanity's extinction.

However, the people of Earth have not yet given up, and there is one last hope for humanity: a promise of salvation from a distant planet known as Iscandar. In order to save mankind, the Space Battleship Yamato, constructed using technology from Iscandar, departs on a journey of one hundred and sixty-eight thousand light years to Iscandar in order to bring back a device that could reverse the devastation to the planet.

Approximately three thousand years ago, this world was invaded by a race of mechanical aliens with god-like powers known as the Mycenaeans, who intended to take over Earth and use it as a forward base in their intergalactic conflicts. Embryo, one of the world's top scientific minds and theoretical physicists, used his invention, the Ragna-mails, against the Mycenaeans. Originally designed for interdimensional exploration, the Ragna-mails are equipped with powerful weapons known as Space-Time Convergence Cannons. While the use of these weapons led to the defeat of the Mycenaean Gods and their subsequent sealing within dimensional rifts, it also caused Dragunium - the primary energy source of this world - to detonate on a global scale because of Embryo's treachery, polluting the world and killing the vast majority of its population.

The surviving political leaders and loyal civilians of the conflict used genetic engineering techniques to adapt to the now devastated Earth, becoming the Dragons. They sealed themselves within a barrier, and began the process of rebuilding their own civilization. However, the Dragon civilization still had one goal besides rebuilding their civilization: avenging the fallen by capturing or killing Embryo. Meanwhile, a separate civilization began developing outside the barrier, one which would eventually become the Earth Federation.

Despite being entirely separate from the outside world, a select few individuals in this world know of the Dragons' existence. One of them is Dr. Saotome, a scientist renowned for his research on Getter Rays, a powerful form of cosmic radiation. Dragunium is actually the crystallized form of Getter Rays. He even named the second generation of Getter Robo after the Dragons, due to their natural ability to absorb Getter Radiation. Others who are aware of the Dragons include Dr. Hell and the commanders of Nerv, who all refer to them as "Hermits of Wings".

In order to create a brand new utopia, free from war and pollution, Embryo stole Aura, the first Dragon, from this world, and shifted to a parallel Earth, using the Dragunium energy of Aura to create the World of Mana.

Approximately five hundred years ago, Embryo shifted to this world, and created the Founding Nations. The residents of the Founding Nations are capable of using Mana, an advanced information sharing system capable of manifesting one's will into physical forms powered by the Dragunium energy of Aura. Through the use of Mana, the Founding Nations soon became free of war, poverty, and hatred. However, humans who cannot use Mana due to the reemergence of ancient genes soon surfaced. Despite Embryo's best efforts, he could not prevent these "Normas" from being born. Therefore, he spread the idea that all Normas are dangerous anti-social monsters and unified the world of Mana against them.

When discovered, Normas are forcefully separated from the general population and sent to Arzenal, an island detention facility in the middle of the Pacific Ocean, where they are forced to combat the Dragons from the Universal Century world (who are attempting to retrieve Aura) in machines known as Para-mails. While officially, Arzenal's purpose is to protect the rest of the world from the Dragons, its actual purpose is the collection of Dragunium from the corpses of the Dragons, which is then used to fuel Aura.

The sea area surrounding Arzenal is known as "Area D", and is avoided by all air traffic and satellite orbits due to the electromagnetic disturbances generated by the Dragons' Singularities. The area is also patrolled by unmanned mobile weapons of the Founding Nations (including GN-X mobile suits and Euclid mobile armors), which indiscriminately attack anyone attempting to enter the area, and are responsible for recovering the corpses of Dragons, but do not assist the Normas in combat. The existence of Arzenal is kept secret, but the Orb Union, which is geographically close to the island, secretly supports the Arzenal personnel. Celestial Being is also aware of the existence of Arzenal and the Dragons (though not even Veda has access to in-depth information regarding Arzenal).

Since the Founding Nations hold great sway even among the Earth Sphere Federation, the other member states do not interfere in their affairs despite their inhumane treatment of Normas. However, because of this, travels to and from the Founding Nations are rare due to their poor public relations.

The original inhabitants of the world, the Ancient Humans, opposed Embryo's plans and rebelled against him many times. In order to combat Mana, they created technologies that can modify human genes. To obtain the power to defeat Embryo, one of them created an organization intended to rebuild the world through destruction. In response, Embryo created Blue Cosmos and Logos, and manipulated the Innovators into turning on Celestial Being. In the end, the Ancient Humans were forced to surrender or be wiped out. However, they managed to steal one of Embryo's Ragna-mails, the only weapon capable of killing Embryo, setting into motion the events of Cross Ange. 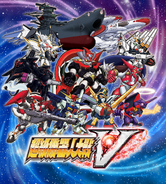