This game is a partial remake of 4th Super Robot Wars. The series Neon Genesis Evangelion makes its debut in this game.

There are two separate paths in the game - one for Real Robots and one for Super Robots. The main character pilots a Gespenst in both of them, however, its stats differ - in the Real path, the Gespenst has more Agility, Limit and Mobility, while in the Super Robot path it will have more HP and Armor, as well as the ability to fly.

The storyline of the game continues in the sequel, Super Robot Wars F Final. 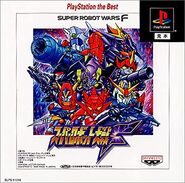