The story revolves around an organization called the Shadow-Mirror, which exists in a parallel world where events happened in a different way than the "Advance" world, thus making the state of the worlds different, though a bit similar at times. Its leader, Vindel Mauser, desires a world of eternal war to make humanity improve more through those wars. His plan is to send his agents towards another dimension, spy on the defense forces of the world in order to make adjustments on the attack, and eventually conquer it.

The player is given a choice as one of the two possible volunteers of the jump to the "Advance" world from the Shadow-Mirror universe and will later discover through their own way whether the Shadow-Mirror is right or wrong.

The "parts" mechanic made some of the earliest units some of the deadliest, such as the original RX-78-2 Gundam and Boss Borot. On the first playthrough, these units are the only ones you can upgrade all the way to max, and when coupled with the obscenely rare "W-Up" part that raises stats in accordance to how many item slots a unit has, early/"weaker" units, often having all four slots, get tremendous stat boosts. 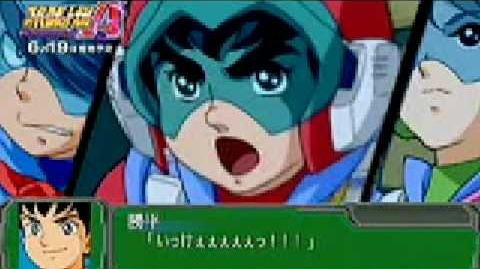