Ideon a Contact (85 min); The Ideon: Be Invoked (98 min)
Space Runaway Ideon (伝説巨神イデオン, Densetsu Kyojin Ideon, lit. Legendary Giant God Ideon) is an anime television series produced by Sunrise. It first premiered on the Tokyo 12 Channel (later to be TV Tokyo) from 1980 to 1981, followed by two feature films released in 1982, and was later broadcast in Japan by the satellite TV network Animax from September 2006. Ideon was created and directed by Yoshiyuki Tomino, and was the series he produced immediately following his most famous work, Mobile Suit Gundam. Its mechanical designers were Submarine (series) & Higuchi Yuuichi (movies) and its characters were designed by Tomonori Kogawa.

The series won the Animage Anime Grand Prix prize for the second half of 1980.

The Ideon: Be Invoked

Space Runaway Ideon begins in 2300, far enough in the future that mankind has begun colonizing other planets. On the planet Solo in the Andromeda Galaxy, a group of archaeologists had come across the mysterious remains of the Ideon—three large armored trucks with the ability to transform into a godlike mecha. They also come across a large spaceship. For six months they had diligently restored the machines but failed to get the giant tanks to move. Suddenly, a humanoid alien civilization known as the Buff Clan comes across Solo.

Karala, the daughter of the Buff Clan's military commander flies down to the planet against orders to investigate (her commanding officer, Gije, is reluctant with her, due to her standing and the fact that he once was a soldier under her father). She is pursued closely by comrades sent by Gije, but they lose sight of her. Assuming the "aliens" (Earthling colonists) have attacked Karala, the Buff Clan begins to attack. Cosmo Yuki, the afro-wearing protagonist of the series, climbs aboard one of the three tanks and, when it initially forms the Ideon, fends off the first assault, repelling Gije's men.

This is a short respite, though, as another force is sent down soon after. Bes Jordan, leader of the sparse military force stationed with the colonists orders that the Ideon tanks be armed with missiles, but while that's happening the cities on Solo are obliterated by the Buff Clan soldiers. An air raid siren is sounded and the survivors, using the Ideon for protection, board the spaceship found with the Ideon (known as the "Solo Ship") and flee. The survivors travel from planet to planet, constantly pursued by the Buff Clan who desire the Ideon for themselves along with the mysterious energy source behind them, known only as the "Ide".

The Ideon is piloted by several Solo Ship crew members, but the main pilot is Cosmo Yuki.

As the crew of the Solo Ship fight and survive further, the true power of the Ideon begins to slowly be revealed with terrifying results. Although the crew often latches onto various hopes and optimism, as the death toll of the crew rises and the devastation surrounding them increases, the crew of the Solo Ship slowly begin to despair. Eventually turned away by their own world out of fear, what fate awaits this lost ship and its inhabitants?

Reflecting its status in animation, the Ideon is considered one of the most powerful mecha ever featured within the "SRW" games. Ideon has a gauge, known as the "Ide Gauge", which increases as Ideon is attacked. As the Ide Gauge rises, Ideon's general capabilities increase dramatically (including Ideon's "EN" becoming infinite) and the unit unlocks three weapons: Zen-houi (All Directional) Missile, Ideon Sword, and Ideon Gun (the latter two are available in both a "normal" version and a MAP version). The Ideon Gun is particularly powerful; along with an attack power of 9999, enough to destroy most lesser enemies in one hit, the MAP version has a massive blast radius which often almost covers the battlefield. It is one of the most dangerous attacks in the Super Robot Wars series. However, when the Ide gauge reaches the maximum level, the Ideon becomes uncontrollable and goes berserk, destroying the universe by self-destructing, which means the end of the game. Hence, while absorbing attacks can rise the Ide Gauge and let the player to use those devastating weapons, there is a great risk that the Ideon will be attacked for too many times and go berserk.

Although rather difficult and dangerous to use in Super Robot Wars F, in 3rd Super Robot Wars Alpha the Ideon is possibly quite overpowered due to its massively increased ease of use. The 'berserk' system is also removed.

In 3rd Super Robot Wars Alpha, the apocalyptic ending of Ideon is one of three possible endings in the game and is arguably the worst of them all. This ending is triggered during scenario 56, the final Ideon scenario. If a certain decision is made by the player, the tragic events of the Ideon finale play out with an unavoidable conclusion. All pilots on your force even state comments of hopelessness as they attack anything when this ending is triggered, to further the feeling of dread upon the horizon. This ending is only available upon the second playthrough, and while it is something most players should see at least once, it also ends the overall game earlier than usual (The actual game length is 60 levels), and also doesn't count as a finished game, so it is recommended in most cases that this ending be avoided. The only significant benefit of seeing this ending is getting a glimpse of Messiah, the unborn child of Bes and Karala who in Be Invoked, guided the dead cast towards an ambiguous recreation of the universe.

The Ideon also appears in a non-canon crossover manga with Gundam, Mobile Suit Vs. Giant God: Gigantis' Counterattack, with story and artwork by Yuichi Hasegawa. In this story, set in Universal Century 0090, the Federation sends Amuro Ray to recruit Judau Ashta to help deal with a group of Zeon remnants. While this seems routine, the Zeons have uncovered what they call the "Giant God", namely the Ideon (which is never actually called Gigantis nor Ideon within the story). While investigating, Judau learns that the Zeons are planning on using Minerva Lao Zabi's Newtype powers to awaken the Giant God and get their revenge. Unfortunately, it goes out of control and begins attacking anything in sight. As Judau infiltrates the Giant God, Amuro (along with Char Aznable) fight to distract it. As he nears Minerva, the spirit of Karala and her baby appear, explaining that Ideon remade the universe because it hoped that a new type of human - namely, Newtypes - would be the universe's salvation from war. But since this turned out not to be the case, the Giant God was set to remake the universe again. Judau also learns that he is the reincarnation of Ideon protagonist Cosmo, and violently opposes this plan. With Amuro's help, he manages to free Minerva and shut Giant God/Ideon down before it can do any more harm.

Yoshiyuki Tomino's name comes up in the story, as Amuro explains the myth of Giant God (the events of the Ideon series) to Judau, suggesting that he exists in the Gundam world much the same way Marvel Comics and its more prominent staff members such as Stan Lee exist within their own world. 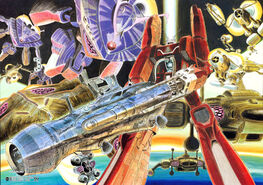 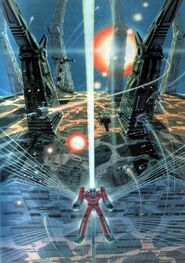 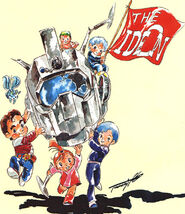