Hagane no Tamashii
The SRX, also known as the Super Robot X-Type, is a Banpresto Original Mecha from the SRW-exclusive series Chouki Taisen SRX, debuting in Neo Super Robot Wars. Part of the SRX Project, it is formed from the Variable Formation (a.k.a Only One Crash) of R-1, R-2 Powered and R-3 Powered. It is also capable of using the R-Gun Powered as a weapon, the H.T.B Cannon. The SRX is succeeded by the SR-01 SRX Altered, a.k.a Banpreios.

The SRX is a very large robot with an oddly shaped head that is shaped like a giant mask similar to that of the Banpresto logo. The head also features a v-fin in reference to Gundam mecha. Much of the upper body and arms is colored with blue and while the stomach area and lower have an orange-red and white color. On the feet are very noticeable large white "blades". The SRX is very boxy in terms of its design but appears very formidable in terms of offense.

The centerpiece of the SRX Project, the Super Robot X-Type, or SRX, is based around the concept of an almighty Super Robot formed from the combination of 3 smaller Personal Troopers (R-1, R-2 Powered and R-3 Powered). Through the combination and separation of the SRX at the will of its pilots, the SRX Team can effectively adapt to various combat situations that may arise on the battlefield. An example of this is to either clear out small-fry enemy units and coordinate with other PT-class mecha as individual Personal Troopers, or combine into SRX to handle large-sized opponents with immense firepower. The SRX is powered through the R-2 Powered's (R-3 Powered in Neo SRW Earth Route) Tronium Engine and equipped with the R-1 and R-3 Powered's T-Link Systems, granting it unrivaled output and telekinetic performance. Despite being a powerful and versatile robot, the SRX is not without weaknesses. The SRX's power source, the Tronium Engine, is extremely volatile, which is why constant monitoring of the Engine by a specialist is needed to ensure that a meltdown does not occur. Another problem is that the SRX's frame structure is highly unstable, and can only be supported by telekinesis through the use of the T-Link System, which puts a heavy burden onto the assigned Psycodriver's body and mind. These factors culminated together hampers the SRX's possible formation counts and operational time per each battle, and is also why potent pilots must be present in order to pilot the R-Series mecha.

The official name for the SRX's combination sequence is known as "Pattern O.O.C", short for "Only One Crash", however Ryuusei (and eventually Rai and Aya as well) prefers using the phrase "Variable Formation" more, as a homage to the mecha anime shows that he dearly loves. During the SRX's first combination attempt in Neo SRW Earth Route (which ended in failure), Ryuusei accidentally used the phrase "V-Together!" instead, the combination rally of the Voltes Team.

First appearance. The limited operational period is emphasized with this game, as the SRX only has a combination time limit of 3 minutes (3 turns) per sortie. For Space Route, formation into SRX is possible at the start of Stage 30, where it was used to burst into the wreckage of the Libra battleship. For Earth Route, formation into SRX was attempted on Stage 30, however it ended in failure due to insufficient reactor output as well as the lack of the R-3's Plus Parts. Combination is possible from Stage 31 onwards, after R-3 was upgraded to R-3 Powered and loaded with a Tronium Engine (instead of the usual R-2 Powered).

The SRX was developed as part of the SRX Project, utilizing EOT technology discovered inside the large asteroid Meteor-3 that crash-landed on Earth, spearheaded by Major Ingram Prisken.

During the SRX Team's first battle with the now-defected Ingram's Astranagant (Stage 50), Variable Formation was initiated by Ryuusei, and thus, SRX was born. Due to structural problems, the SRX can only be formed for 10 times until the end of the game. Later, after the R-Gun Powered had been rebuilt by Mao Industries (following the destruction of the defected Ingram's unit at the hands of Londo Bell), sent to Londo Bell (start of Stage 61) and piloted by Viletta Vadim (or Levi Tolar as a Secret), SRX will be able to use the R-Gun Powered as the H.T.B Cannon. So far, SRW Alpha is the only game where SRX and R-Gun Powered can merge into a single-square unit, essentially creating a 4-unit combination mecha.

The R-1 and R-2 Powered were disassembled following the end of the Balmar Campaign as they were deemed too costly for maintenance by the Earth Federation, followed by R-3 Powered and R-Gun Powered at the end of the game, which meant the lack of SRX in the game.

The SRX Team (aside from Viletta) as well as the R-Series mecha did not made an appearance in Alpha 2.

The original R-Series robots were eventually rebuilt in Alpha 3 and deployed in combat as SRX as the full might of the Ze Balmary Empire began to invade Earth, however in its first battle against the new invasion wave, the SRX was devastatingly defeated at the hands of the Hazal Gozzo's Vayikran, which also meant the destruction of the R-1. Although all 3 of the SRX's pilots survived the mecha's destruction, Ryuusei lost his telekinetic abilities and suffered from severe trauma due to the SRX's defeat as well as believing Aya to having been killed in action, while Aya was instead captured by Balmarian forces.

The SRX's origin in the OG timeline is more or less identical to its Alpha counterpart.

By the time of the Inspector War, the SRX would be able to dock with the R-Gun Powered and use the powerful H.T.B Cannon.

For OGs2, after defeating the humongous Stern Neu Regisseur within the Einst Space, the Steel Dragon Squadron used the SRX to generate a warp back to their universe, by connecting the thoughts and feelings of the Squadron members with those on Earth through the SRX's T-Link System, along with Gilliam Jaeger's utilization of System XN from the salvaged Zweizergain.

The SRX will fight through many ensuing conflicts, such as the Shura Rebellion and the Sealing War.

An SRX from the Shadow-Mirror world is also seen in the opening sequence of OGIN Episode 1, defeated by the Gespenst Mk-III. Rai and Aya's cockpits had already been crushed, as the Gespenst Mk-III finishes off Ryuusei, despite his confused and desperate pleas.

The OG world SRX made an appearance for 4 episodes, first in Ep 16 to intercept the Sol Gravillion, the second time in Ep 21 during the raid on the Earth Cradle, and lastly throughout Episodes 25 and 26, where it partially destroyed the Stern Neu Regisseur as well as the Neu SRX.

The SRX fires a huge beam ray attack from its visor. In Alpha and OG, a split-second view of the Banpresto logo can be seen and the trademark Banpresto jingle can be heard when the beam makes contact with enemy. Unseen in the GBA OG games.

The SRX powers up its fist with telekinetic energy and delivers a punch attack. Basically a T-Link Knuckle for SRX.

The SRX charges up the one of the blades on its feet to perform a diving kick attack.

Combination attack with Exbein Boxer, used to destroy a Rhinoceros-class battleship during the Earth Cradle raid in OGIN. SRX and Exbein Boxer unleashes their Blade Kick and Catapult Kick attacks at the same time.

The SRX generates a blue ball of energy from its fist, followed by several more energy balls being released from the larger ball and damaging the opponent, before SRX lunges the energy ball on its fist at the opponent, creating a giant, destructive purple sphere around the enemy.

SRX unleashes the Telekinesis Missiles, Hi-Finger Launcher and Gown Genocider at the same time. Only seen in Super Robot Wars OG: Divine Wars OVA along with the OG Chronicle and Record of ATX mangas.

This is Ryuusei's personal name for the SRX's Z.O (Zol Orichalconium) Sword. The sword is essentially comprised of the R-Wing's nosecone as the handle and stored within the chest. A blade made from Zol Orichalconium will be materialized when the weapon is formed.

With the Z.O Sword, SRX delivers a powerful slash attack. In the games, this attack is always referred to by the name of the sword used for the attack. Unseen in OG2, 2nd OG or OGMD.

This is Ryuusei's name for the attack where the SRX uses its Zol Orichalconium Sword to perform a powerful stab attack. The Z.O blade detaches from the handle and remains inside the target as the SRX pulls away. The blade then bursts into energy as Ryuusei yells "Nendou Bakusai!" (念動爆砕！; Telekinetic Burst!), hence the name. Since Super Robot Wars Original Generations, the SRX will first use the Dominion Ball to paralyze the enemy in a Telekinetic Field before initiating this attack. SRX's ultimate solo attack.

Also known as the H.T.B. Cannon (Hyper Tronium Buster Cannon). Combination attack with R-Gun Powered, where the R-Gun Powered transforms into its Metal Genocider Mode and is used as a giant gun by SRX. Power from the SRX's Tronium Engine is synchronized with the R-Gun Powered's own Tronium Engine (with Ryuusei exclaiming "Energy Charge, 120%!" in OG), as the trigger handle for the weapon emerges in front of Ryuusei. Taking hold of the handle, Ryuusei cries "Ichigeki Hissatsu! Buster Cannon!" (一撃必殺！バスターキャノン！ ; One-Shot Certain Kill! Buster Cannon!), followed by the gigantic Super Robot blasting the unfortunate enemy to smithereens. 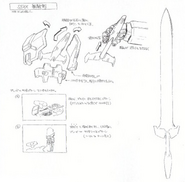 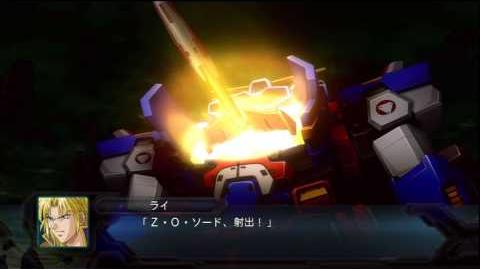