The Gate of Magus (αGaiden)

Sänger Zonvolt (ゼンガー・ゾンボルト, Zengā Zonboruto) is a Banpresto Original character in the Super Robot Wars series. In both the Alpha and Original Generation timelines, he pilots the Dygenguar.

The self-styled "sword that smites evil" (悪を断つ剣, aku wo tatsu tsurugi), Sänger Zonvolt is a very honorable individual who fights for his own personal beliefs. Hardened by a long career as a soldier, Sänger has an amazing amount of wisdom on the battlefield and can sense the potential in allies and enemies alike. His demeanor and manners of speech are reminiscent of a samurai, and as such, Sänger and his personal machines are always depicted with a Katana -- in the case of the latter, all of his machines have a gigantic, specially-made Katana called the Zankantou. Sänger also has a tendency to speak with yojijukugo -- four-kanji idioms -- a trait which his fellow swordmanship-in-training, Brooklyn Luckfield, inherits in future games. Examples of such phrases are ichiisenshin (一意専心, "wholeheartedness"), ittou ryoudan (一刀両断, "single-stroke bisection"), and jinba ittai (人馬一体, "horse-rider unity"), though Sänger uses an alternate version (刃馬一体, "blade-horse unity"）.

He frequently phrases "Ware wa Zengā Zonboruto, Aku wo tatsu tsurugi nari!" ("I am Sänger Zonvolt, the sword that smites evil!"), which he recites before he attacks with his Zankantou then ("Waga Zankantou ni tatenu mono nashi!" meaning "There is nothing that can stand against my Zankantou!") after he finishes the attack. In the Japanese version, any of his powerful attacks using Zankantou will most likely be accompanied with shouting the word "CHESTO!!!".

In the Alpha timeline, Sänger first appears in Alpha Gaiden. Here, he has a deep sense of devotion to the main designer of the Earth Cradle facility, Sophia Nate, to the point where he is seemingly in love with her. This devotion plays a role in the dystopian alternate future in the story of Alpha Gaiden, where Sänger shows fanatical loyalty to Magus, the central supercomputer of the Earth Cradle that has fused with Sophia. Through the persuasion of Londo Bell's pilots, Sänger realizes that Magus is not the same Sophia Nate he swore to protect and chooses to fight against the Ancestors and free Sophia from Magus's control.

Continuing in Alpha 2, he would be defending the Earth Cradle once again (since the events of Alpha Gaiden would never have existed, as the Aegis Plan was successfully completed and implemented) from the attacks of Kukuru and her Magarga. The Dygenguar would be handed down to him and he would assist the Alpha Numbers in defeating the Earth Guardian Irui Gan Eden and the invading Balmarians in Alpha 3.

Unlike in the Original Generation timeline, Sänger personally requested that the Dygenguar's original armament be shut down permanently, choosing to fight only using his Zankantou.

Sänger Zonvolt began as a member of the Aggressors unit, an elite group of pilots formed by the Earth Federation Army with other notable members such as Elzam V. Branstein, Gilliam Yeager, and Kai Kitamura. When the unit was disbanded, Sänger was relocated to the North American Langley Base and started to form the ATX Team. When the Divine Crusaders declared war on the Earth Federation, led by such convictions, Sänger chose to leave the ATX Team and join forces with the Divine Crusaders, fighting once more alongside his old friend, Elzam.

As a member of the faction, Sänger upholds the more honorable intentions of Bian Zoldark and seems to understand the point of Bian's rebellion: it is supposed to strengthen the forces of Earth and prepare them for an impending invasion by alien forces. This dedication to valor often causes Sänger to butt heads with another high-ranking soldier, Siebel Mistrel, who feels that the ends justify some truly devious means, such as trying to kill his enemies with poison gas or making the threat of gassing a space colony.

Both Sänger and Elzam join the Earth's forces in time for Operation SRW, the final offensive against the Aerogater invaders before going their separate ways. He and Elzam retreat into hiding, waiting for the opportunity to reveal themselves again when a new alien threat would arrive to terrorize the people of Earth. As expected, in Original Generation 2, both the mighty Inspectors and mysterious Einst appear. Sänger and Elzam, under the disguise of Rätsel Feinschmecker, immediately rush to join their old allies in the battle against the extraterrestrials as well as the Neo Divine Crusaders and Shadow-Mirror. Upon arriving at the Tesla Leicht Institute to free it from Inspector occupation, his Grungust Type-3 (Sanshiki) is torn apart by the Inspector Vigagi and his Galgau, but shortly after, he acquires Bian's last gift to him: the incredible Dynamic General Guardian, which he shortens to Dygenguar.

After learning the presence of Dr. Sophia Nate, Sänger participates in the assault on the Earth Cradle, which is defended by Shadow-Mirror officer Wodan Ymir, his combat rival. Sänger comes out of the duel as the victor, successfully completing his mission and destroying the core of Magus, freeing Sophia from its possession. After the war against the Shadow-Mirror, Einst and Inspectors is over, Sänger chooses to hide in the shadows once again along with Rätsel, Yuuki Jegnan, and Ricarla Borgnine aboard the Kurogane. In Original Generations, he is joined by the Super Robot Wars Reversal characters Raul Gureden, Raji Montoya, and Mizuho Saiki.

In Super Robot Wars Original Generation: The Animation and later Super Robot Wars Original Generation Gaiden, Sänger appears in his Dygenguar as a reinforcement for the Hagane during their assault on the Hellgate facility. Sänger is also quite active in fighting the Shura army. At one point, the Shura General Magnaz Ald ambushes him and breaks the Dygenguar's Zankantou, forcing Sänger to fight with the Dygenguar's original weaponry (which luckily he had personally requested to be re-activated once more), showing that he is not dependent on his Zankantou alone. Sänger would have the Zankantou repaired after the fight, though.

In 2nd Original Generation, Sänger at first were amongst the people thrown into La Gias, along with Dygenguar. He was found by both Ryuune Zoldark and Hwang Yang Long, and some other pilots, and helped finish the Langran Civil War. Once he returned to the surface, Sänger took up the battle against the Gaia Sabers, Guest, Baral Garden and Ruina. Along this time, Sänger became acquaintated with a girl that was picked up by Ibis Douglas previously, Irui. He also formed rivalry with a servant of Baral Garden, Kukuru

In this time, the Dygenguar became a target of a sentient robot called JinRai, designed to destroy Dynamic General Guardian units. Sänger perservered and eventually went along with the plan concocted by Touma Kanou and Minaki Tomine to capture the main robot and eventually reprogram it, turning it into RaiOh/DaiRaiOh.

During the final assault at the Garden of Baral, Sänger saved Kukuru from certain death, after learning how she was duped into the Baral Garden's servitude by Son Ganlong. However, much to his shock, it only delayed the inevitable, after the defeat of Baral Ganeden and eventually Euzeth Gozzo, Sänger saw Kukuru dying as her life was linked with the Baral Ganeden, although she died with no regrets. Once all was settled, Sänger once again took residence in the Kurogane, until his services is needed again.

Some time later, Sanger is transported to the teleportation room of the Schlafen Celeste, where he is greeted by Haken Browning and Kaguya Nanbu. Before they can send him back home however, the transporter spits out a pair of Soul Bees and their master, the Demon Lord Jedah Dohma. Kaguya blesses Sanger's Katana to unlock it's spiritual power. The blessing transforms the sword into a colossal blade, the very image of the Type-3 Zankantou, only sized for Sanger's hands. The resulting fight damages the transporters, leaving Sanger stuck in the Endless Frontier until it can be repaired. While there, he joins with several other heroes to defeat a plot to merge many different worlds together.

After that incident, Haken and Aschen Brodel attempt to use the repaired teleporter to send Sanger home, only to end up taking themselves along for the ride. Fortunately, the Kurogane happened to have been drawn to their location by the dimensional disturbances caused by the activation of the transporter.

In the Shadow-Mirror universe, Sänger was killed in combat. Lemon Browning would have his body retrieved, and using data containing his personality, she created the 15th (and apparently the 5th) unit of the W-Series of androids, codenamed Wodan Ymir and Gymnos Basileus, respectively. Wodan would become Sänger's main combat rival in the events generated in Original Generation 2.

Sanger & Wodan - Rest in the Cradle
Sanger and Wodan in Original Generations. 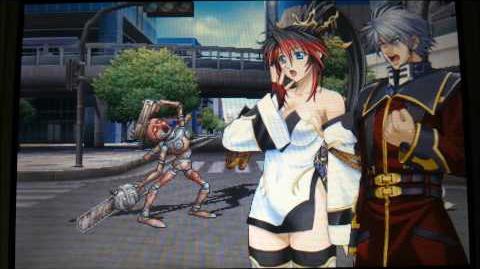