The R-Gun, also known as the Real Personal Trooper Type-Gun, or alternatively Argun (アールガン) is a Banpresto Original Mecha debuting in Super Hero Operations, before making its SRW appearance in Super Robot Wars Original Generation. It is later upgraded into the R-Gun Powered.

The R-Gun is a humanoid machine with a very sleek design. It is colored in a shade of dark purple. Various linings and decorations of white and orange are apparent on various places on the body. The head of the unit uses a visor.

Part of the SRX Project, the R-Gun was developed as the Heavy Metal Particle Cannon Hyper Tronium Buster Cannon (重金属粒子砲ハイパー・トロニウム・バスターキャノン), a.k.a H.T.B Cannon or Metal Genocider, a "R-Weapon" for the SRX's use. However, due to its large size and portability issues, a transformation gimmick into a Personal Trooper was integrated into the Cannon, allowing it to both serve as an individual combat force and, through transforming into its Metal Genocider Mode, as a weapon for the SRX. It is equipped with enhanced sensors compared to the R-3 and a more powerful Tronium Engine compared to the R-2, however the R-2's engine instability problems still remain. The mecha in its R-Gun form cannot be used by SRX as a weapon without the Powered parts, however it can use the HTB Cannon on its own.

Leading mecha for the game's first half. The machine is installed with a T-Link System, however in the event that both the PT and the pilot are facing immediate danger, the T-Link System will automatically switch to the Uranus System and unlock the R-Gun's hidden "black box", allowing transformation into Metal Genocider Mode and usage of the H.T.B Cannon.

The unassembled R-Gun was first retrieved by the spaceship Peacemillion from an abandoned Mao Industries facility on the Moon in A.D 195. Ingram Plissken/Viletta Prisken repaired the machine all by themselves and will be piloting it on a mission to intercept the Ultimate Gundam, before being sent back to the year A.D 155, where the main hero will fight alongside the Gaia Savers against the ETF. Halfway through the game, the R-Gun will be upgraded into the R-Gun Powered mid-battle, allowing it to be used as a weapon by SRX.

The R-Gun had already been upgraded into its R-Gun Powered form when it first appeared in Super Robot Wars Alpha, hence the R-Gun configuration does not appear in the Alpha timeline.

The R-Gun was developed on Mao Industries' Moon facility as part of the SRX Project, only referred to as "Argun" for confidentiality purposes. It wasn't equipped with a T-Link System yet so that anyone can pilot the machine and give feedback on it.

When Colony Integrated Army forces took over the facility during the DC War, Viletta Badim escaped the facility with the R-Gun to prevent it from falling into enemy hands. It was picked up by the Hiryuu Kai shortly after and was integrated as part of their fighting force, up until the Hiryuu Kai's triumph over the Integrated Army's central fleet, leading to the Army's defeat. After the battle, the R-Gun was disassembled for readjustments and sent to the TFA's Far East Branch for Major Ingram Plissken's use. Ingram was onboard the R-Gun during the first large-scale Aerogator raid, where he revealed his true affiliation and and betrayed the heroes. If the R-Gun is defeated during the battle, it will be retrieved by the heroes and repaired for combat while Ingram is picked up by Viletta in an Ezekiel. If not fully defeated, Ingram will take the R-Gun along with him (Viletta will return with a replica R-Gun for OG1/OGs1 Ryuusei Route near the end of the game, but the machine will be lost forever on Kyousuke Route). After arriving on Nevi'im, either the stolen R-Gun or a replica of it will be used by Ingram to create the R-Gun Rivale. It should be noted that the replica R-Gun can still use the Metal Genocider, however it is unknown where did the replica's Tronium came from.

By the time of the Inspector War, the R-Gun had been upgraded into the R-Gun Powered and equipped with a T-Link System, planned for a telekinetic pilot's use.

In Divine Wars, the stolen R-Gun piloted by Ingram fought against the heroes but was soon discarded after Ingram summoned the R-Gun Rivale and was retrieved by Viletta after the L5 Campaign.

In Record of ATX, the R-Gun was possessed by the Astranagant from a different dimension and mutated into the R-Gun Rivale. After it was defeated, the Rivale exterior crumbled to pieces and the mecha returned to its original form.

Two rapidly firing Vulcan guns mounted on the R-Gun's head. They're not very effective on Personal Troopers and similar sized enemies, but they're good for destroying small fighters and ground targets.

A pair of beam-emitting katars are equipped on the R-Gun, protruding from the mecha's back. They can be combined to form the Slash Boomerang. Only seen as an attack in OG1 and OGs1, where the Katars are handheld and used to slash the enemy.

By combining the handles of the Beam Katar Swords, the Slash Boomerang is formed. Only seen in Super Hero Operations, where the T-Link System already installed on the R-Gun allows for the weapon to be thrown at the enemy using telekinesis.

A double-barreled rifle that can fire both physical and beam blasts. Ingram and Viletta often exclaim "Double Fire!" when using this weapon. Swappable Weapon in OGs. In Super Hero Operations, the weapon is instead named as "Magna Twin Rifle" (マグナツインライフル).

By transforming into its Metal Genocider Mode, the R-Gun is capable of firing the H.T.B Cannon by concentrating its Tronium Engine output into a single blast, however it is an extremely energy-consuming attack and usually used as a last resort only. 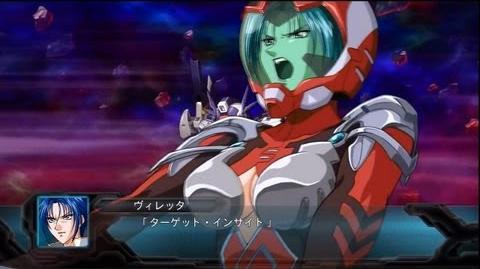