Being a Super Robot, the Grungust has a somewhat bulky with thick armor and are significantly larger in proportion to Personal Troopers. The body parts generally look very thick with simplistic, cartoon-like body lines. Another distinctive feature is the large jet turbines mounted on the robot's shoulders.

The Grungust is a mighty Super Robot equipped with various close combat weapons and variability into alternate combat forms, powered by a Black Hole Engine (Classic) / Plasma Reactor (OG). It can change into either an agile aircraft form known as Wing Gust (ウィングガスト) for aerial engagements or a sturdy tank form known as Gust Lander (ガストランダー) for long-range bombardments and underwater combat (possibly a homage to the Super Robot Daitarn 3). This is achieved through the integration of Variable Geometric Alloy, or VG Alloy, into the Grungust's armor, a sort of shape-memory alloy that grants the Grungust its shapeshifting-like transformability, ignoring armor structure/formation. Furthermore, the Grungust uses special TGC Joints, loaded with gravitiy-manipulating devices that help control inertial mass and thus reduce the amount of stress exerted on the body. A brainwave controlling system as well as a voice input system are also installed as piloting aid. Out of the Grungust Series, the Grungust is the most well-balanced in terms of performance, gaining it the nickname "Choutoushi" .

Unlike succeeding timelines, only either the Huckebein or the Grungust will be built in the Classic timeline, depending on the player's chosen route. The Grungust was developed at the Tesla Reich Institute by the United States goverment as a successor to the Gespenst Type-S in order to compete with the Super Robots of Japan, however the project hit a dead end. Fortunately, the Haran Conglomerate owned by Banjou Haran provided financial backing for the project, allowing the Grungust to be completed properly. In all Classic games, the Grungust's brainwave controlling system is tuned specifically for the hero, making them the only person capable of piloting the mecha.

At the start of Stage 21, the hero will be asked by Banjou Haran to head to the Tesla Reich Institute, where they will receive the Grungust as a birthday present from the hero's father, stored in Hangar 4.

2 Grungust units were built, using EOT as part of the SRX Project. Unit 1, assigned to pilot Irmgard Kazahara, saw actual combat a few months before the events of SRW Alpha, when it participated in the defense against the Dinosaur Empire's first invasion. After the conflict came to an end in November N.A.D 186, Unit 1 was sent to the EFF Far East Branch and upgraded into the Grungust Kai. The remaining unit was probably used in the restoration of the badly-wounded RyuOhKi into RyuJinKi at the start of SRW Alpha 2.

As detailed in the prequel manga, the Grungust made a small cameo during the first Dinosaur Empire invasion, entering combat with several Mechasaurus.

The Grungust was developed based on Grungust Type-0, with a total of 3 units being made. Unit 1 is normally referred to when mentioning about the Grungust. Unit 3 is identical Unit 1 in all specifications. Unit 2, however, sports a primarily red color scheme and uses a "Lion Type" head, while also being installed with a T-Link System for telekinetic pilots. Aside from the Star Type head used by Unit 1 and 3, there are also 3 other head variations for the Grungust, which are the Hawk, Dragon and Tiger Types.

The Grungust was completed at the Tesla Reich Institute and sent to the Langley Base in North America, before being shipped to Izu Base in Japan by Prof. Jonathan Kazahara for his son Irmgard, narrowingly escaping DC forces with the help of the ATX Team stationed there (Kyousuke Route Stage 7). Switching to Ryuusei Route, the Taussenfuessler carrying the Grungust came under attack from DC forces at the outskirts of Izu Base, prompting the Izu Base PT team to head out and provide cover, which also led to Irmgard receiving the Grungust from his father mid-battle (Stage 12). For Kyousuke Route, the Grungust will be incorporated into the player's teamn after Stage 22, as the ATX Team merges with the Hagane crew at Izu Base. Near the end of the L5 Campaign, during the Nevi'im infiltration operation, the Steel Dragon Squadron will fight against Trauma Shadow versions of some of the Squadron's mecha, which includes a version of the Grungust.

The Grungust and Grungust Unit 2 will fight through many ensuing conflicts, up until the end of the Shura Turbulence. Some time between OG Gaiden and 2nd OG, Unit 1 was upgraded into the Grungust Kai, while Unit 2 was never seen again.

The Grungust was built by the Nicola Wilhelm Institute alongside the Huckebein. Charlotte Hastings serves as its primary pilot. The player cannot transform the Grungust into its alternate modes; instead the Wing Gust and Gust Lander formations are integrated into the G-Combination attack.

Included in the secret scenario "V-Junction" as a guest mecha along with all other VXT Banpresto Originals.

A pair of long-range cannons mounted on the Grungust's back. They are usually used in Gust Lander mode most of the time, but can also be fired in robot mode as seen in RoATX. The Cannons also serve as sheaths for the Keito Ragou Kens.

Grungust's finisher in Wing Gust mode. The Wing Gust deploys an energy field in front itself and performs a continuous barrel roll, as it rams through the target.

Grungust's finisher in Gust Lander mode. Similar to Spiral Attack, the Gust Lander deploys an energy field in front of itself, this time with the field itself taking shape of a drill and rotating rapidly, as the machine rams through the target.

A new combat maneuver added in SRW V, utilizing both of the Grungust's alternate modes. The Grungust transforms into Wing Gust and closes in on the target, as it unleashes a volley of Big Missiles followed by a Double Omega Laser (mentioned below) blast. After that, the Wing Gust transforms into Gust Lander and bombards the enemy with Omega Cannon shots before finishing off with the Drill Attack.

The Grungust launches its booster-propelled forearms at the enemy. Obvious Rocket Punch homage.

Numerous 4-blade shurikens thrown from the Grungust that explodes shortly after impact. Only seen in Classic.

Can be somewhat considered as the modern version of the Break Cross, seen in OG. These are throwable knife-like projectiles deployed from within the Grungust's forearms, handheld when used. They are first seen used by the Grungust in RoATX, before making their in-game debut in 2nd OG, equipped on the Grungust Kai, where they are also shown to explode upon impact.

In 4th SRW/ 4th SRW S, the Grungust Beam (name changes depending on the player's custom robot name) is a large and immense energy burst released from the Grungust's entire body. In SRW F Final, the attack's name was changed to Final Beam, due to the game now featuring prerecorded voices for the pilots. In OG1, the "Omega Laser" chest weapon used in Classic is now renamed as Final Beam. From OGs onwards, the attack now consists of the 3 triangular beam emitters on the Grungust's chest flipping forwards, as they converge to generate a powerful, destructive beam.

The Grungust's primary melee weapon. In Classic, the sword is materialized from thin air. In OG1 and OG2, the sword is seemingly generated from lightning bolts converging. Starting from OGs, the Keito Ragou Ken is given a more "realistic" storage area, with one sword stored within each Omega Cannon on the Grungust's back. Dual-wielding is also possible.

The "Keito" (Ketu) and "Ragou" (Ratu) in the weapon's name refer to the names given to the South and North lunar nodes respectively in Hindu mythology. Both of them are considered as malefic celestial bodies, thus Irm can be heard chanting "Ten ni futatsu no magatsuboshi...!" (天に二つの禍つ星 | Two stars of calamity in the skies...!) when initiating Ankensatsu.

The Grungust's ultimate attack, performed with the Keito Ragou Ken. From Classic up until OG2, the Grungust will slash the opponent horizontally with its sword. For OGs and OGG, after drawing the Keito Ragou Ken, the Grungust leaps into the sky and slashes down on the target, before making another horizontal slash, forming a cross-shaped mark on the target. Irm additionally shouts "Zan!" (斬! | Slash!) after the attack if it's a finishing strike, from SRW F Final onwards. In OG, Grungust seemingly enters "Ichishiki Final Mode" when unleashing this attack, as noted by many pilots that can be chosen to pilot the robot.
"Ankensatsu" (Dark Sword Killing) refers to to the direction opposite to the Gooudo Star (五黄土星 | Fifth Yellow Earth Star, which represents the Earth element, wastelands, or even the Earth itself) in Kyuusei Kigaku, if said direction happens to be a bad direction in that year. It signifies disaster and unexpected bad luck from someone else, as if "killing with a sword from the dark". Kyuusei Kigaku is a form of fortune telling based on astrology.In the Classic SRW timeline, it is said that the Grungust's ultimate attack was named as such due to the hero's father being highly considerate of Kigaku. There is also a slight running gag at how certain pilots, when chosen to pilot the Grungust by the player, will mistake the attack's name to "Ansatsuken" (暗殺剣 | Assasination Sword), with Irm himself even remarking this fact in one of his battle lines.

A technique used by the Trauma Shadow Grungust in OG1. It is thought to be similar in nature to attacks such as Grungust Type-2's Nishiki Bakurenda - a continuous barrage of punches. 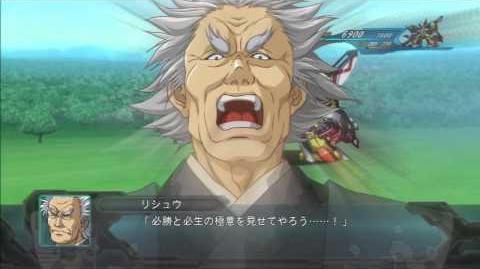 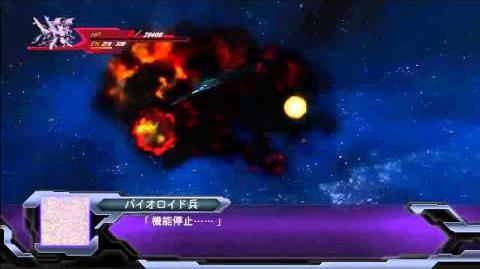 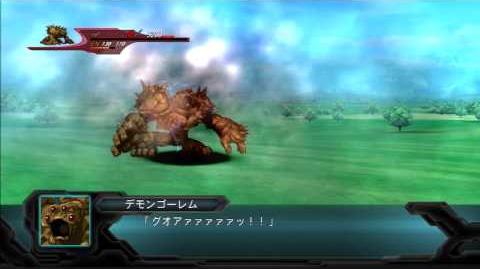