This page covers the mecha known only as "Gespenst".

The Gespenst (ゲシュペンスト) is originally a Powered Suit debuting in the Hero Senki: Project Olympus and Battle Dodgeball II video games of the Compati Hero Series, before being reimagined as a giant robot and becoming a Banpresto Original Mecha, beginning from The 4th Super Robot Wars. It is the starting point of the Gespenst Series, one of the most prominent mecha linage in Super Robot Wars, and had spawned numerous variations and upgrades throughout various timelines. Notably, in many timelines data from it was used to develop the Gespenst Mk-II and other variants.

The first ever Gespenst appeared in Hero Senki: Project Olympus, in the form of a battle armor, rather than as a full-scale mech. This Gespenst was used by Gilliam Jaeger, while part of the player's party, but eventually becomes the party's enemy. Through a merging with System XN, the Gespenst becomes the XN Geist. This Gespenst armor and Gilliam return in Battle Dodgeball 2, where he joins Fighter Roar, Emi and Dark Brain as the God Factory Team.

In Super Robot Wars Compact 2, it is said that 3 prototype Gespenst units were built before the debut of the Gespenst Mk-IIs. In Compact 2 Part 3, the Gespenst appeared as an enemy unit created by Einst based on data found from the captured Weissritter, marking the first time (second time if counting the Type-R/S in 4th/F) that the unit named "Gespenst" appeared in Super Robot Wars, as well as the first of the Gespenst Series to act as an enemy mecha in SRW. Although it is created by the Einst, it is only named as "Gespenst".

3 prototype Gespenst units were built but were rejected in favor of the Dragoon units from Metal Armor Dragonar.

In the Original Generation timeline, the Gespenst Series is the primary production line of mechs for the Terra Federation Forces. In this timeline, the amalgamation of all previous Gespenst variations in previous timelines make an appearance, except the XN Geist.

The Gespenst Type-R was referred to as only "Gespenst" in SRW OG2/SRW OGs2.

3 Gespenst units appear in a flashback piloted by the Cry Wolves members Hugo Medio, Alberto Esto and Foglia Esto during a mission to intercept the Devil Gundam. Foglia's unit was destroyed while Hugo's unit was heavily damaged, forcing Alberto's unit to drag Hugo's unit away to safety.

The Gespenst appears as the sub-hero's initial mecha, depending on which main character you choose.

Compact 2 only. It is unknown where the weapon is located at, but due to its firing sprite bearing similarities to the Alteisen's firing sprite, it is speculated that the mounting position is on the left arm like the Alteisen's 3-Barrel Machine Cannon, replacing one or two of the Plasma Cutters.

Standard armament seen on the Gespenst Series, it is essentially a deployable missile container loaded with 6 missiles. After launching, the container's front cover is jettisoned and the missiles within fly towards their target. A pair of them can be mounted on the Gespenst's stabilizer pylon rack along with 2 Slash Rippers. In SRW T, for the Neutron Beam attack, the pilot bombards the enemy with the Split Missiles first before using the rifle.

3 plasma swords (maybe 2 or 1 for Compact 2) for close combat are mounted on the left forearm. In SRW T, for the Slash Ripper attack, the pilot finishes off the enemy with a Plasma Cutter stab after deploying the Slash Rippers.

Circular remote-controlled rotor weapons equipped with 3 folding blades, each installed with 3 vernier thrusters per side for a total of 6 maneuvering thrusters. They are deployed to slash enemies apart. A pair of them can be mounted on the inner side of the Gespenst's stabilizer pylon rack along with 2 Split Missiles, though they do have dedicated containers. Seen in SRW T.

A customized energy rifle for the Gespenst, which fires accelerated neutral particles.

An electric chop with the right arm.

A customized beam rifle for the Gespenst.

A missile fired from the Neutron Beam.

A beam fired from the Neutron Beam.

A laser fired from the Neutron Beam that absorbs some of the enemy's HP.

A powerful beam fired from the Neutron Beam. The Gespenst's strongest weapon.

A rifle which fires a beam that diffuses into 3 directions at the opponent. Level 2 finisher. 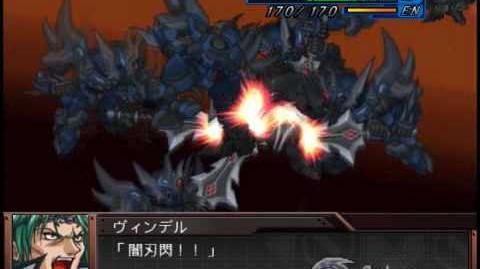