The Exbein is part of the Huckebein series of Real Robots, and as such bears a strong resemblance to a Gundam. However unlike the Huckebeins, it lacks the distinctive gold "V-Fin" antenna, and a visor covers the upper part of its face. Its head is otherwise identical to that of the Huckebein MK-III. The Composite ver.Ka figure and lineart reveal that it has a flight pack as well as additional armament not yet seen in the series, most of which is carried over from the Huckebein Mk-II and Mk-III.

The Exbein was originally created in to serve as a substitute for the Huckebein Mk-III in the SRW OG: The Inspector TV series, due to Sunrise not liking the idea of the popularization of a Gundam-like mecha not owned by them in an anime. In both OG timelines, the Exbein, upgraded from the Huckebein 009, served as an intermediate between the Huckebein Mk-II and Mk-III, along with being used as a testbed for the Core Trooper System that will be implemented into the Mk-III, hence why the mecha also has the ability to combine with the AM Parts. Similar to the Huckebein Mk-III, the Exbein's flight pack must be swapped out in order for it to dock with the AM Boxer. It is also equipped with a T-Link System.

Within the OGIN universe, by the time New A.D.187, the development of the Huckebein Series has been halted, which prevented the completion of the Huckebein Mk-III Type-L but also allowed Mao Industries to concentrate their resources on completing the Exbein (at the time only codenamed as "EX" in order to mask its identity). When Inspector forces commenced their assault on Mao Industries' Moon facility, similar to OG2, the nearly-finished Exbein and its equipment were shipped out from the facility using a Tausendfuessler piloted by Ryouto and Radha Bairaban, escorted by the AM Gunner and Valsione. Seeing his friends getting overwhelmed by the Inspector forces, especially by the Greytarkin, Ryouto decided to board the Exbein, equip it with the AM Boxer to form Exbein Boxer and help his friends push back the invaders. It is also in this battle that the Exbein Boxer showed the ability to dock with the AM Gunner without purging the AM Boxer, in order to fire the Full Impact Cannon and force the Greytarkin to retreat. Following the battle, the Exbein was integrated into the Hiryuu Kai as a battle force of the Steel Dragon Squadron, fighting through many of the Squadron's battles such as the retake of Riksent, Operation Plantagenet, the raid on the Earth Cradle and the 4-way final battle against Shadow Mirror, Inspector and Einst forces.

In the OG games, the first Exbein (also known as Exbein Unit 1), upgraded from the Huckebein 009, was developed as part of the "Extra-H Project" by Mao Industries to develop a next generation mainline Personal Trooper, as well as to test out the Huckebein Mk-III's Core Trooper System. It was initially supposed to be built under the name RTX-009EX Huckebein EX, with a red paint job (probably a reference to a mecha of similar name from Super Robot Wars Alpha), but due to the discontinuation of the SRX Project, and with it the Huckebein Series (which more or less emphasized the TFF top brass' fear of EOT technology), the Huckebein EX was renamed to PTX-EX Exbein, had its external look altered and recolored to blue in order to fool the eyes of the TFF higher-ups.

The Exbein was in an unassembled state by the time of the Mk-III's rollout during the Inspector War. During the Shura Turbulence, it was suggested to have the Exbein assembled to strengthen the Steel Dragon Squadron's combat force, however time was not in the Squadron's favor. After the conflict, the Exbein was finally assembled and about to be sent to Hickams Air Force Base along with all of the other Huckebeins (aside for the Mk-II Unit 3) for an overhaul, however they came under an ambush by the Galilnagant, leaving the Huckebeins completely destroyed and the Exbein severely damaged. Using remaining spare parts and parts from the Huckebeins' wreckage, the Exbein was quickly patched up into the Ash and piloted by Ing Wish.

Following the Sealed War, 2 more Exbein units were created: the Exbein Type-R and the Exbein Type-L, piloted by Ryouto Hikawa and Rio Mei Long respectively. The Exbein Type-R looks identical to the Exbein Unit 1's blue-white color scheme (possibly to reference the paint job of Ryouto's destroyed Huckebein Mk-III), while the Exbein Type-L is painted red. These units were fitted with both a normal T-Link System and a newly-developed APT-Link System, which would allow pilots without the TK Pulse Alpha the ability to use telekinetic weapons, such as the Exbein Boxer's G-Sword Diver or the Exbein Gunner's G-Impact Zapper. Although they are not as powerful as the original Huckebein Mk-IIIs due to lacking a Tronium Engine, the development and installation of new Miniature Plasma Generators on these units help to further close the performance gap between the Exbeins and the Mk-IIIs. A red AM Boxer and AM Gunner had also been newly built specifically for the Type-L.

The Exbein Type-L first debuted as a playable unit in SRW OG: Infinite Battle (which itself is publicized as an in-universe arcade game).

The Type-L reappeared in Super Robot Wars OG: The Moon Dwellers, this time alongside the Exbein Type-R. The Exbein Type-L and Exbein Type-R by themselves are not playable in the OGMD, instead they can only be deployed to battle in either their Boxer form or Gunner form.

Two rapidly firing machine guns mounted on the Exbein's head. They're not very effective on Personal Troopers and similar sized enemies, but they're good for destroying small fighters and ground targets.

Exclusive to the Composite Ver.Ka figure. Energy swords based on those used by the Huckebein. The energy blade is generated through gravity waves utilizing the Gravi-Con System. A pair of these can be stored within a storage rack that can be mounted on the forearms or the side skirts.

Exclusive to the Composite Ver.Ka figure. Originally seen on the Huckebein Mk-II, this is a launcher mounted on either forearm that can fire a wire-guided circular sawblade at the enemy.

A seemingly enhanced variant of the Huckebein Mk-II's Photon Rifle. It has a slightly altered design compared to the older model.

Originally developed for the Huckebein Mk-III, it is a throwing weapon stored on the left forearm, made from Zol Orihalconium. When used, the weapon opens up into a large cross-shaped shuriken and is thrown at the enemy. The Zol Orihalconium built into the Slasher is energized and produces a shining effect when the weapon is thrown. Seen used by the Exbein Gunner in OGIN (during the final battle) and by Exbein Boxer in the OG games.

Originally developed for the Huckebein Mk-III, it is essentially a miniaturized version of the Huckebein Mk-II's G-Impact Cannon, now wieldable with one arm. Although less powerful than its base model, it is still quite a formidable weapon, and its compact size allows for more flexibility on the battlefield. When used, it is deployed to the Exbein externally through the use of purgeable booster parts. Only seen used by the Exbein Gunner in both OGIN (during the final battle) and the OG games. 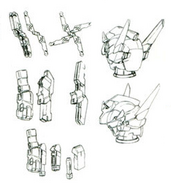 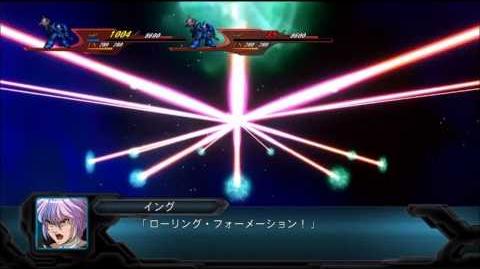