The Cybuster is a bird-like humanoid mecha, composed primarily of silver Orichalconium . Some parts of its body, such as the interior part of its armor and its hands, are colored violet. It has red in its crest and other parts of the body, as well as some green crystals. The Cybuster's claws are yellow and has three pairs of wings extending from its back, and a tail that becomes the head of its Cybird form. It is armed with a mecha-sized sword, called the Discutter. During the time of the possession mode, the external form of the Cybuster changes, with blue plates of armor covering his wings and other parts of his body.

The Cybuster is one of the four Masou Kishin  developed by the Langran Kingdom. Due to its blessing by the Seirei (Holy-rank spirit) of the Wind, Syphis, it was called Masoukishin of the Wind. However, Cybuster is only the codename of this unit. Like the other Masoukishin units, their true names has never been revealed in order to guard the units against magical attacks. It is one of the seventeen units of the Langran Kingdom's Masouki Project, designed by Wendy Rasm Ignart, to fight the revival of the God of Destruction, Sava Volkruss and its followers. This Masoukishin is one of the fastest units created and the only one to gain the ability to transform.

Despite having been created in another dimension, the design specifications of the Cybuster (and the other Masouki as well) were nearly identical to that of a Personal Trooper, although its power source remained a mystery to Earth Federation scientists. The machine is powered by a Fulcanelli-type eternal engine, operating off the prana, or lifeforce, of the pilot through a Prana Converter. Its armor is constructed out of Orichalconium, it was arranged in such a way that the arrangement of its particles and geometrical structure provide magical protection to the unit. Also, the Cybuster uses an Spirit Radar (a radar able of detect spirit-like beings) and an Ether Communicator, whose functions are very similar of those of a standard radars and communicators created by Earth science (in fact, the Ether Communicator is able to tune terrestrial radio frequencies without any problem).

The Cybuster is mechanically similar to the other Masouki, except for the fact that its the only known Masouki whose systems are governed by the Laplace's demon computer, a mysterious magical computer sought-after by the various factions for its ability to predict the future. Wendy states that the computer ins't based in the demon of Laplace, but in his theory. Under extreme circumstances, the Laplace demon's computer can interface with the pilot through the Spirit Dependancy Link, an event known as "full possession", "fusing" the blessing elemental and the pilot of a Masoukishin, enhancing its power at the fullest, and giving Cybuster the ability to access to the Akashic Records and gain control over the Principle of Cause and Effect.

In its second battle against the Granzon in La Gias, Syphis was able to possess the Cybuster in this manner, granting it -- and by extension, its pilot, Masaki -- nearly godlike powers, which was then used to defeat the Granzon in one blow. This, however, nearly drained Masaki completely of prana, something that would have been fatal, had Masaki possessed the prana reserve of a "normal" person and not received a first-aid prana transfer from Wendy. In Alpha and Alpha Gaiden, Syphis can perform a lesser form of possession, which grants less power but doesn't cause a near-fatal drain of prana. In Masoukishin II, Masaki is finally able to talk with Syphis, and she granted him the ability to master the possession mode, making the Cybuster one of the most powerful mecha in existence. However, the possession mode only last for a few minutes before the Cybuster returns to his normal state.

The unit is also capable of a more flight-beneficial mode, known as the Cybird, a bird-like form, enhancing its already terrifying speed of movement to make it one of the fastest mecha in existence. However, only a select few weapons are enabled when the Cybuster becomes the Cybird. The Cybird design was based on the "Deishnas", the holy bird of Langran.

While not reflected in-game (except in the Masou Kishin games), the Cybuster is equipped with the Self-Regeneration System, allowing to repair itself. It is also the only known Masōki able to travel between La Gias and the surface world on its own, without the aid of any sort of portal.

It is revealed in Masoukishin II that the Cybuster was based in the design of the mysterious Zelvoid, an ancient mass produced mecha used in the past to defeat Volkruss for first time. In fact, Cybuster resembles like a good version of Zelvoid, and some weapons of Zelvoid are very similar to the weapons of Cybuster. Its unknown what kind of relation Cybuster has with Zelvoid, however. Its creator, Wendy, don't remember how she created Cybuster, since she was possessed during that period of time by the spirit of her evil twin, Tuddy.

During one of its early appearances on Earth, the Earth Federation designated this mech as the AGX-005, because under the mistaken belief it was an Aerogater mech. This later was declared a misnomer, seeing that the Cybuster was also fighting against the Balmarian Aerogaters.

It would later appear to assist during the battle with the Inspectors, Einst and Shadow Mirrors, then later the Shura, Duminass and Dark Brain. After the defeat of Neo Granzon, Masaki would return to La Gias, but it appear again to help in the battle against the Guest, Ruina and Gaia Saviours.

After the Coffin of the End incident Cybuster would be fitted with an imitation of the Lichrol Converter installed to the Raveraid so it could still remain operational but would require consistent purification of the negative energy or risk Masaki's Prana being inverted. After the destruction of the Crossgate by Touya Shiun and the Granteed Dracodeus the Cybuster could no longer be recharged. 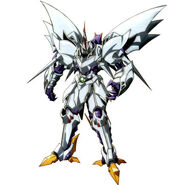 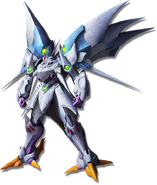 Seirei of the Wind, Cyfis

Cyfis, handlind a sphere of pure prana during the Akashic Nova attack 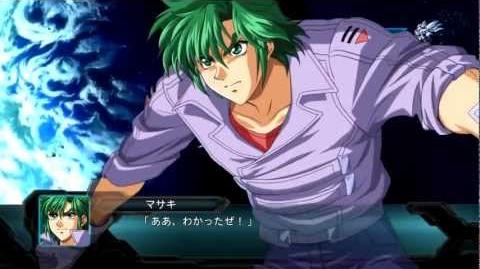 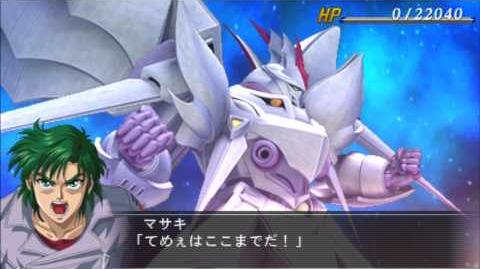 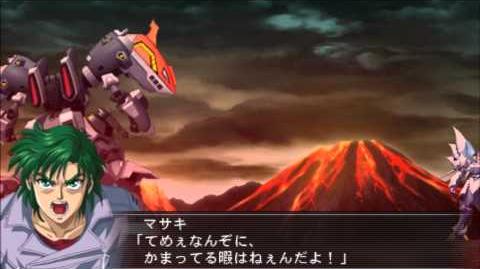