Bemidban (ベミドバン) is a fictional mecha in the Super Robot Wars series, it appears as both an enemy and playable unit in Super Robot Wars Alpha 3: To the End of the Galaxy piloted by Baran Doban.

Bemidban carries an image of a massive suit of armor with large hands and feet, it's shoulders are mounted with massive engines and there are small thrusters starting from the under arms lining the back of the machine

Bemidban is a one of the oldest machines active belonging to the Balmar Empire being built over 500 years ago, it has been handed down to and customized by different members of the Doban Family with its most recent inheritor being Baran Doban by the time of Balmar's 2nd invasion of Earth following the Sealing War and the appearance of the Crossgate, being an old fashioned machine it's only weapon is the massive Doban Hammer which is heavy and solid enough to heavily damage even the Raioh of the Dynamic General Guardian series with one massive hit, it has 2 large engines on it shoulders and thrusters mounted on its back and underarms allowing it to move deceptively fast despite it's size and weight as well as allowing Demidban to spin at rapid speeds to deliver a powerful blow with the Doban Hammer which reduces the target to scrap metal.

Baran Doban woudl use Bemidban to great effect during the Balmar War against the Alpha Numbers, being able to hold his own against machines like Dygenguar and Raioh with his excellent piloting skill, he later joins the Alpha Numbers after sparring with Touma Kanou and his DaiRaioh (Or Sänger Zonvolt depending on the route} and assist them in their battle against Gebel Gan Eden piloted by Rauch Gan Eden and by Shiva Gozzo using Irui Gan Eden's powers, following the destruction of the Balmar homeworld Baran Doban accompanied by Luria Qayits would assist the Alpha Numbers in their battles against the Buff Clan, the encroaching STMC hoard and finally the God of Balmar homself Keisar Ephes. 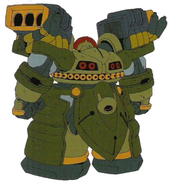