The original Ashsaviour is humanoid in appearance and sports a sleek, mobility-oriented design. Blue is designated around most of the chassis, with white along the other parts of its armor, and gray for most of the joints and fingers. The mass-produced versions are painted in a green and white color scheme.

The ASK-AD02 Ashsaviour is based on the design of the Ashclief from Super Robot Wars 64. It is a high-class balanced unit, piloted by exceptional officers of the Shadow-Mirror. Lemon Browning pilots the original Ashsaber in both Advance and Original Generation 2. Archibald Grims also pilots the unit, after his Rhinoceros land battleship is destroyed in his last stand in Original Generation 2. The Ashsaber is primarily equipped with homing missiles, two hand-held rifles, a beam coat, a missile jammer, and a laser blade for use in close combat. A remote weapons system is mounted on the shoulders of the unit.

After jumping into the Original Generation universe, the Shadow-Mirror began mass-producing many of its units brought over from their own dimension, using the resources supplied from the Neo Divine Crusaders and Isurugi Industries. At the same time, they decided to create a mass-production variant of the original Ashsaber. The result would be the ASK-AD02M Ashsaviour M, whose performance would surpass the Earth Federation Army's Gespenst MK II Ms and Huckebein MK II Ms. However, unlike the original, the remote weapons system was removed, due to it not being cost effective if mass-production was to happen.

In Super Robot Wars Original Generations, Lemon Browning would pilot a heavily customized Ash Saviour, tuned to her specifications, known as the ASK-AD02-2 Weisssaviour. Lemon added Weiss to the unit's name, after she discovered the codename of the machine Excellen Browning was piloting from Lamia Loveless. Unlike the previous Ashsaber, the remote weapons on the Weisssaviour are mounted on the back of the machine, rather than on the shoulders. 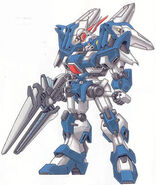 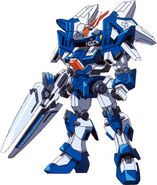 Like most units created by the Shadow-Mirror, the Ashsaviour has a self-destruct option called Code ATA, which stands for "Ash To Ash."

In Super Robot Wars Advance Portable, Lemon pilots the Weisssaviour (instead of the Ashsaviour, which she piloted in the original version). There was a somewhat popular rumor that the Weisssaviour could be obtained as an unlockable, but this would later be proven false.