The Angelg, a super robot, is a distinctively feminine robot, with a color scheme in a combination of pink, white and gold. It is commonly pictured holding its bow. Its design is based on the Simurgh Splendid from Super Robot Wars 64, which looked like an angel.

The SMSC Angelg is equipped with two weapons: a sword (either a metal sword or a beam rapier, depending on the game) and a bow. It has the ability to create afterimages of itself because of its affinity for illusions. In all of its appearances, the controls are registered to recognize Lamia Loveless as its only pilot. 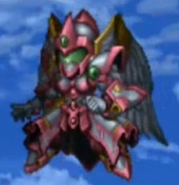 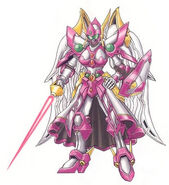 SRW A - Angelg All Attacks