Koutetsu no Beowulf
The Alteisen (アルトアイゼン), also known as the Gespenst Mk-III, is a Banpresto Original Mecha debuting in Super Robot Wars Compact 2 Part 1: Earth Crisis. Part of the ATX Project, it is later upgraded into the Alteisen Riese. It was also temporarily painted in dark blue as night camouflage, and a mini-replica of the Alt's Shadow-Mirror counterpart was built at the Endless Frontier, with both of these incarnations known as Alteisen Nacht. Its main pilot is Kyousuke Nanbu.

The Alteisen is predominantly red with black coloring on its joints and white on various parts of its front chassis and rear verniers. This unit is very bulky for its size and heavily armored, and carries an extreme load of firepower, with a left arm-mounted three-barreled machine cannon, a stake-like weapon on its right arm, and a pair of shoulder-mounted projectile launchers. Unique to the Alteisen is a protruding red horn located on its forehead.

The Alteisen is designed to be a Personal Trooper capable of swiftly breaking through enemy forces with overwhelming power in a single assault. This unit specializes in close-to-mid range combat, closing in on the enemy from a distance with its powerful thrust and delivering a devastating frontal attack. It is equipped with thick layer of armor to aid in the machine's reckless fighting style, along with a powerful thurster system to compensate for the heavy armor. To supplement for its lack of long-range weapons, the Alteisen is designed to work in tandem with the Weissritter, an agile long-range sniping unit with flight capabilities. However, the Alteisen's biggest weakness is in extreme and rapid close-range combat, due to the mecha requiring a certain distance to gain acceleration and deliver its attacks, making it vulnerable against zero-range fighters, most notably the Soulgain.

The Alteisen's head is equipped with a Heat Horn for close encounters, the left arm mounts a 3-Barrel Machine Gun, the right arm is equipped with a powerful, close-range, armor-piercing Revolving Stake with 6 rounds, and the shoulders possess two large Square Claymore launchers with titanium-fitted pellets to supplement its mid-range attacks. It was also equipped with Split Missile containers in Compact, Impact and OG1. In the Super Robot Wars Compact 2 trilogy it was given the model number PTX-003-001 because Banpresto had yet to make 10 or more models of Personal Troopers.

It was developed from the PTX-001 Gespenst along with the Weissritter.

The Alteisen, with Kyousuke as its assigned pilot, was stationed at the Cyber Beast Force Base, belonging to the Earth Federation Army Far East Branch. After repelling an attack carried out by Zeon forces along with allies, it is incorporated as part of the Gundor crew's combat force as the mobile base travels around the world to repel hostile enemy forces. It also participated in the showdown against Einst Regisseur at Jaburo.

It later participated in more battles with Londo Bell after the destruction of the second Einst Regisseur at Earth's orbit, up until the team's encounter with a brainwashed Excellen in her Rein Weissritter. Following the confrontation, Kyousuke travelled to the Moon in order to ask Anaheim Electronics engineer Nina Purpleton to have his Alteisen upgraded, so that he can equally combat the Einst-morphed Weissritter and take back Excellen. The result is the Alteisen Riese.

In the Mass-Production Gespenst Mk-II section of Alpha Gaiden's Robot Encyclopedia, it is mentioned that there exists custom models of the MP Mk-II known as "Alteisen" and "Weissritter", hinting at their somewhat obscure existence in the Alpha Series.

Designed by Dr. Marion Radom, the PTX-003C Alteisen uses the scrapped PTX-003 Gespenst Type-T as the base and wasn't installed with any Extra-Over Technology, as Marion was against it. The PT is Marion's bid for the next-generation, mass-production Personal Trooper of the Earth Federation Army as the Gespenst Mk-III, replacing the Mass-Production Gespenst Mk-II and was designed under the ATX Plan which aimed to create high performance Personal Troopers. However, the machine's concept was considered flawed: because of the heavy weight of the armor and the weapons, no pilot could effectively use it. In addition the Alteisen was designed primarily for close quarters combat and possessed no long range weapons. Coupled along with the high production cost, the Alteisen was deemed too impractical to mass-produce. The only unit produced is handed down to ATX Team member Kyousuke Nanbu when Marion realizes he is the only person who is capable of drawing out the Alteisen's full potential.

The Alteisen served as the basis for one of the ATX Project's next-generation PT, the Wildwurger and Wildwurger Type-L. The Flickerei Geist's right arm also originally belonged to the Alteisen and was salvaged after the arm was ripped off by Soulgain during Operation Plantagenet. In the Shadow-Mirror world, the Alteisen has been adopted by the Earth Federation Army and referred to as the Gespenst Mk-III, with one unit piloted by that world's Kyousuke (more commonly known as Beowulf) and under influence from Einst, giving it regeneration abilities and overwhelming power output to name a few. Data of the Gespenst Mk-III stored within the crashed Trilobite-class ship Neverland was also utilized by the people of Formido Heim in the Endless Frontier to create the Alteisen Nacht.

Kyousuke received the Alteisen a while after arriving at Langley Base, replacing his old MP Gespenst Mk-II (which was later passed on to Katina Tarask). It had its first sortie safely escorting a Tausendfuessler carrying Professor Jonathan Kazahara to Langley Base from DC pursuits, just in time to encounter the Divine Crusaders' new Armored Module prototype in combat, the Lion Type-T. The Alteisen served as Kyousuke's personal mecha for the duration of the DC War and L5 Campaign, often trading blows with his former commander Sänger Sombold's Grungust Type-0 during the DC War.

In OG2, part of the ATX Team, the Alteisen supported Lamia Loveless and her Angelg from DC forces when the android first arrived at the OG world. In OGs2, before their encounter with Lamia, the ATX Team went on a mission to retake the Tesla Reich Institute from DC remnant forces. For a previous operation, the Alteisen had been given a blue paint job as night camouflage, however since there was no time for a repaint the Alteisen had to sortie as it is to the Institute, now temporarily known as the Alteisen Nacht. Midway through the conflict with the Neue DC, Kyousuke requested to Dr. Marion for upgrades to his Alteisen to better combat the new robots fielded by the DC and (at the time, unknown) Shadow Mirror. However, because he is sortied out battle after battle, there is not enough time to grant his request until the machine is badly damaged in a duel with Axel Almer's Soulgain at the end of Operation Plantagenet, losing its right arm and both legs aside from other damages, prompting Dr. Marion to begin the Alteisen's refurbishment. The result is the Alteisen Riese.

For a limited time, Alteisen appeared as a unit players are rewarded with for the 1st Domination Battle "A Faraway Battle, Begins".

On the Alteisen's back are multiple missile containers which are launched at the enemy, followed by the missiles themselves deploying from the container. Only seen in Compact 2/Impact.

A three-barreled machine gun mounted on the Alteisen's left arm.

An elongated horn mounted on the forehead which can be charged with energy and used to cut down targets at extreme close range. It can even be used to parry enemies' blade-type weapons.

The Alteisen's signature weapon, an oversized pile driver (or in this case, stake driver) mounted on the right arm. Six charges in a swing-out cylinder chamber is fired to drive the stake into the body of the target, making this weapon highly effective against heavily-armored units.

A seemingly more powerful Revolver Stake attack with different animation, seen as a SSR attack in Super Robot Wars DD. "OS" stands for "Over Shot", which can also be understood as "Oobari Shot", a reference to renowned animator Masami Ōbari. Oobari animated the Alteisen's iconic Revolving Stake thrusting scene in Super Robot Wars OG: The Inspector, which is also the scene that this attack was based on.

Also known as the "Close Range-Directed Close Combat-Use Explosive Ammunition M180A3" (近距離指向性 近接戦闘用炸裂弾 M180A3). Titanium pellets are stored inside the large boxes mounted on the shoulders and are fired upon release of the compartments. They can only exert their full power when fired at close range. These ball bearings are not unlike the ones that are used in Claymore antipersonnel mines. It was a ranged weapon in early works but was reclassified as a melee weapon in subsequent works, presumably to take advantage of the pilot's focus on melee-based attacks. ALL attack from OGs onwards.

First seen in Impact, this is a special move in which the Alteisen assaults the enemy with a variety of its weapons. Since it only has an ammo limit as well as a range of 1 in all games, it truly serves as a "Trump Card" to finish the battle. There is a difference between the various versions of this attack throughout SRW games:

Combination attack between Alteisen and Weissritter. Although the attack first originated in Impact, only Alteisen Riese was capable of performing the attack alongside Weissritter in the game. There are different attack animations depending on the game: 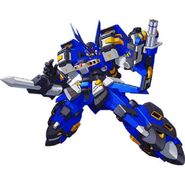 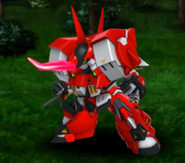 DD sprite, about to use Heat Horn. 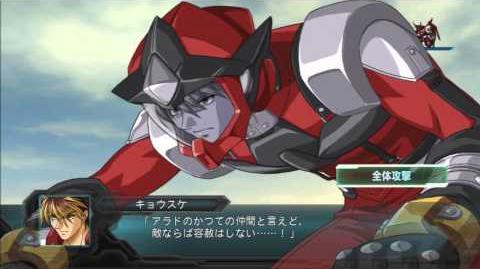